On this page are photos of specific things that may be of use to orient you as you begin to work with Islamic manuscripts. This list is alphabetically arranged. Think of it as a picture glossary. When a word is linked, the link leads to the Islamic Manuscript Conservation Terminology Site, where you can find images and explanations of a wide variety of Islamic bookbinding terminology. 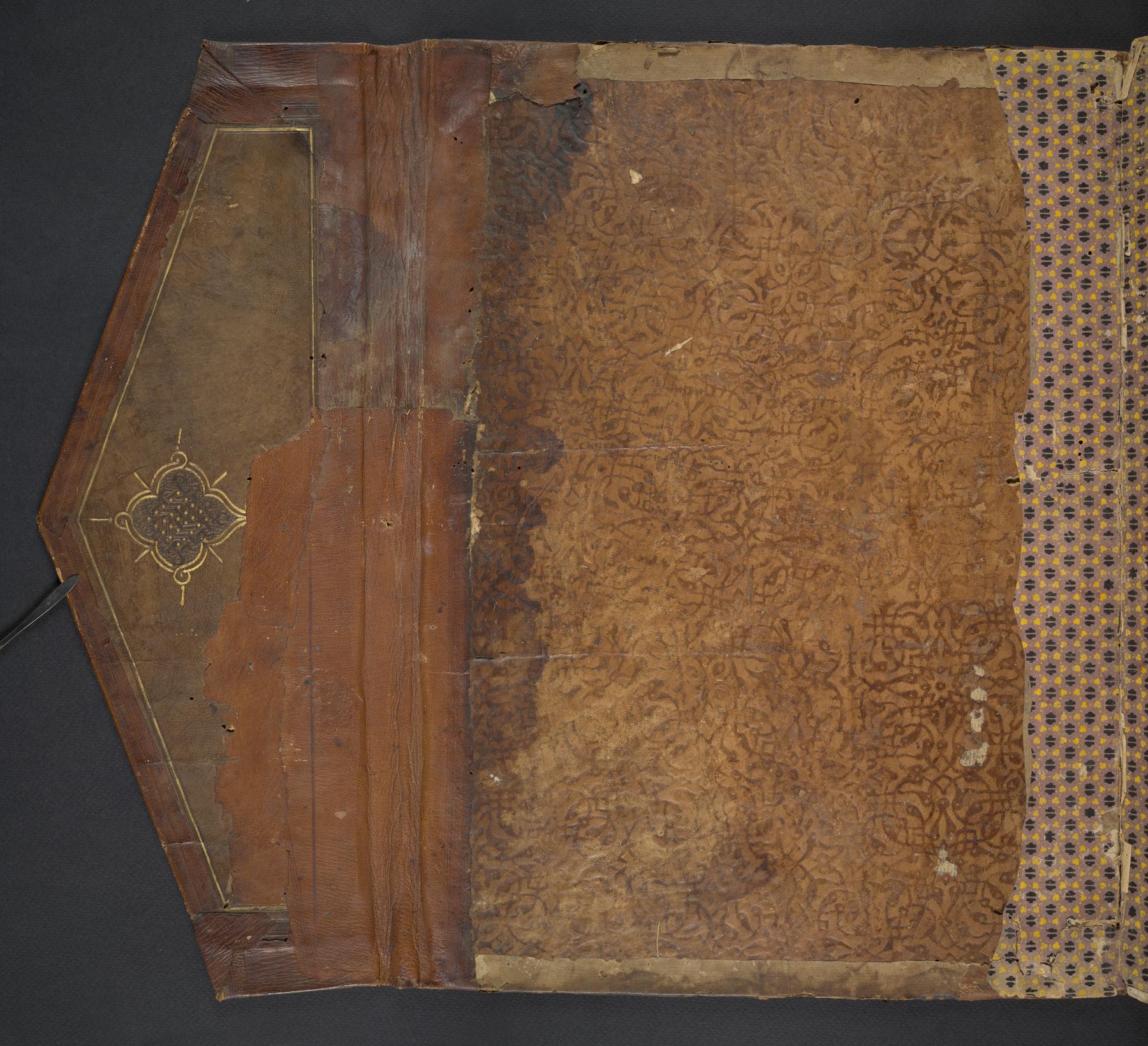 Border rules: Also called ‘rulings’ these lines surround the textblock (the written area) on the page. Often a single red line, but sometimes the rules can be a series of multiple colors, often including gold, in varying widths. In the image below, the left border rule is a detail from UPenn Libraries Ms. Codex 1896 (double red lines) and the right image is from Penn Museum NEP33 (upwards of 9 lines in various colors). Distinct from border rules, a frame rule encloses the entire page-opening and is normally a single black or dark blue line. Frame rules are not as common as border rules. 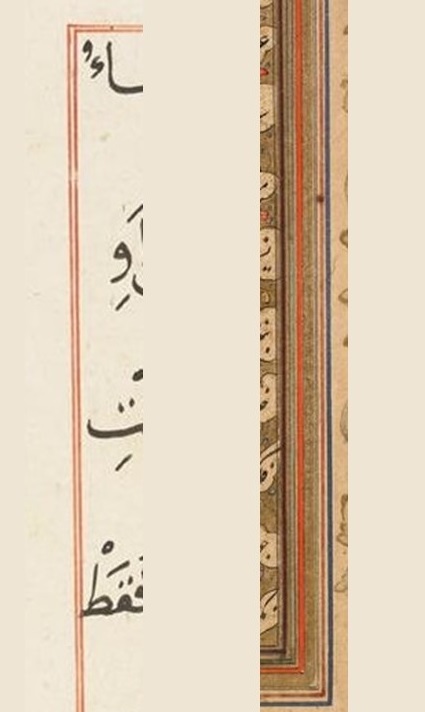 Catchword: A word at the bottom left of the verso (back) of a folio indicating what will be the first word on the following (i.e. facing) page. Catchwords are used for initial collation (putting the pages in the correct order) and then are useful for determining if pages are missing and for re-ordering pages if a manuscripts has been disordered. Below is a detail of a catchword from UPenn Libraries Ms. Codex 1896. The catchword is the word on the outside (to the left) of the double red border rules. 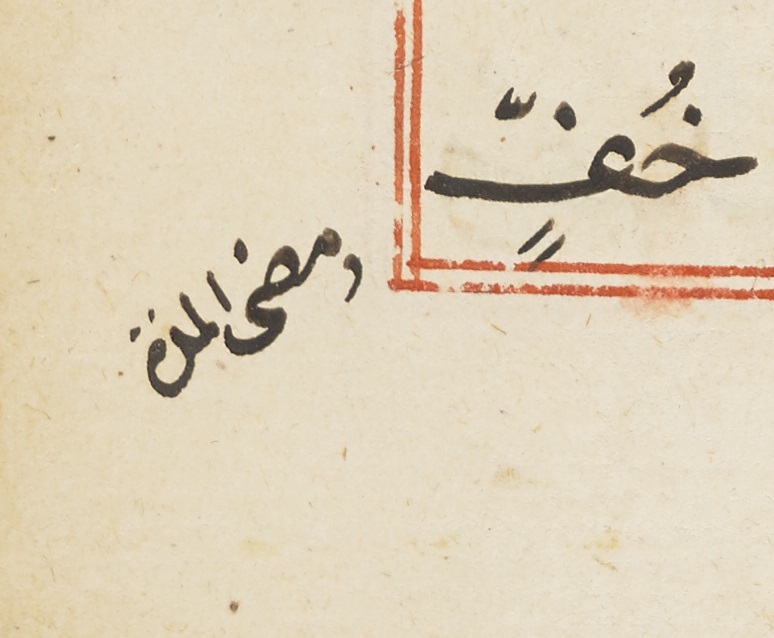 Cloudbands: A type of decoration in which each line of text is surrounded by contour bands which follow the rise and fall of the letters. The space between the bands can be filled in with gold, or flowers, or crosshatching–whatever the illuminator decides. In the images below, details of two types of cloudbands have been set side by side for comparison. The top image is from Penn Museum NEP33, which is richly illuminated and so has elaborate cloudbands of gold with polychrome flowers. Lower image is from Columbia University RBML MS Or 190, a copy of the Qur’an; the cloudbands there are simpler, with gold (or gold-color) around each contour band. 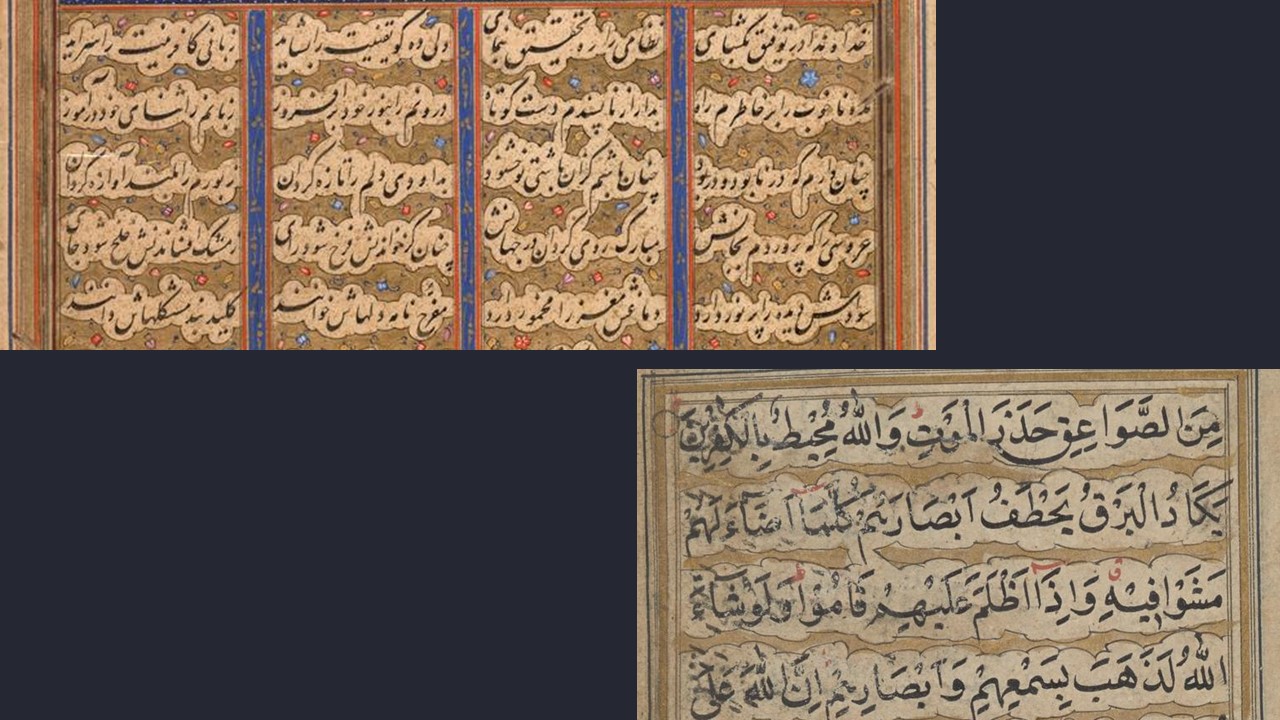 Colophon: The colophon is often found at the end of a manuscript, or the end of a section. If you are lucky, it will tell you when the work was copied and by whom. If you are very lucky, it will also tell you where the copy was made. In many Islamic manuscripts, the colophon is triangular in shape and written in a more informal hand, though there are many exceptions to this rule. Two colophons are below for comparative purposes. The one on the left is from Penn Museum NEP33 and the one on the right is from Columbia University RBML MS Or 448, in that case, the text itself finishes in the triangle and the colophon is in the line right underneath. 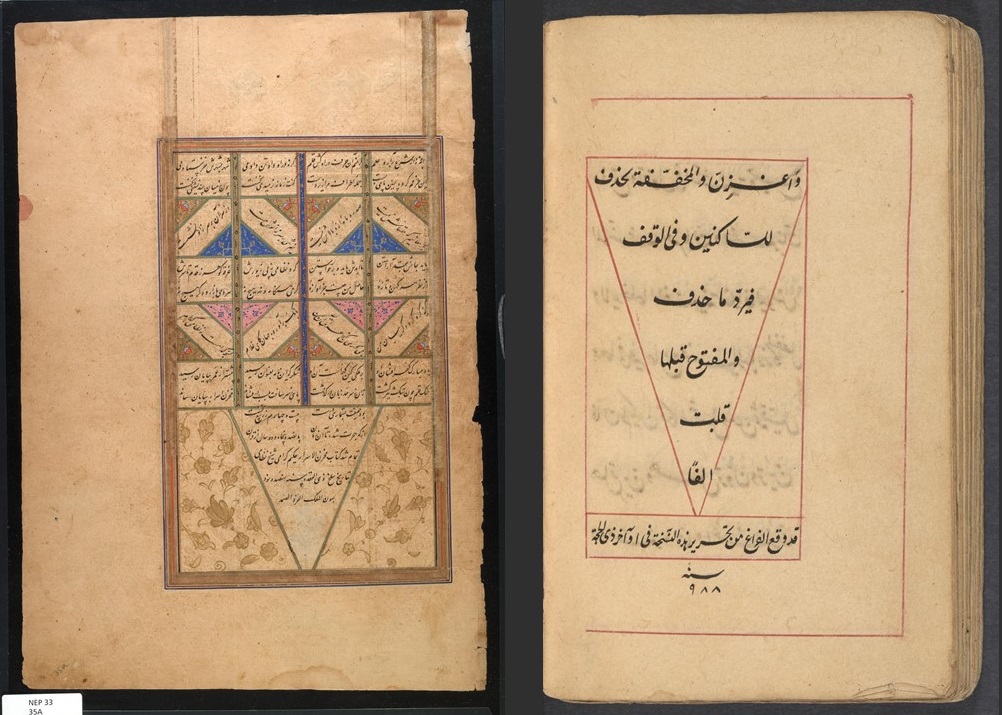 Filigree: A binding decoration where a pattern of gilded paper or leather is cut out and laid over another design. It is most often applied to the inside covers or doublures, since those are more protected from wear and tear. The image below shows two inside covers with details. On the left from Free Library of Philadelphia, Lewis O 53, and on the right from UPenn Libraries, LJS 387. The one on the right is more worn and you can see how the filigree overlay has fallen off, but the same style is visible in both. The one on the left has textile rather than paper for the colors underneath the filigree. 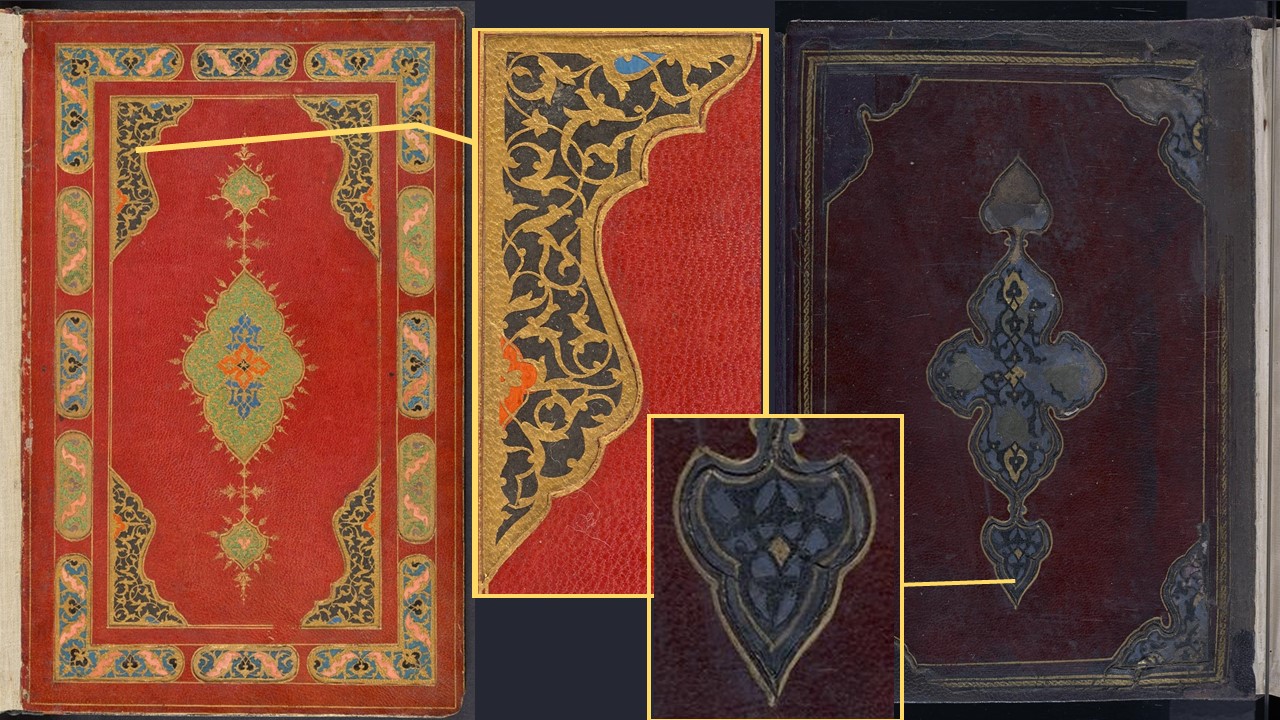 Headpiece: Also called a Titlepiece, this is probably the most common type of illuminated decoration in Islamic manuscripts. Even mostly plain manuscripts tend to have a headpiece, even just a simple one, at the top of the first page of text. The shape of this one, a three sided open rectangle in two registers is most common. Sometimes blue finials will come all the way to the top of the page along the open side. Below is a page with a headpiece from Columbia University RBML MS Or 173. 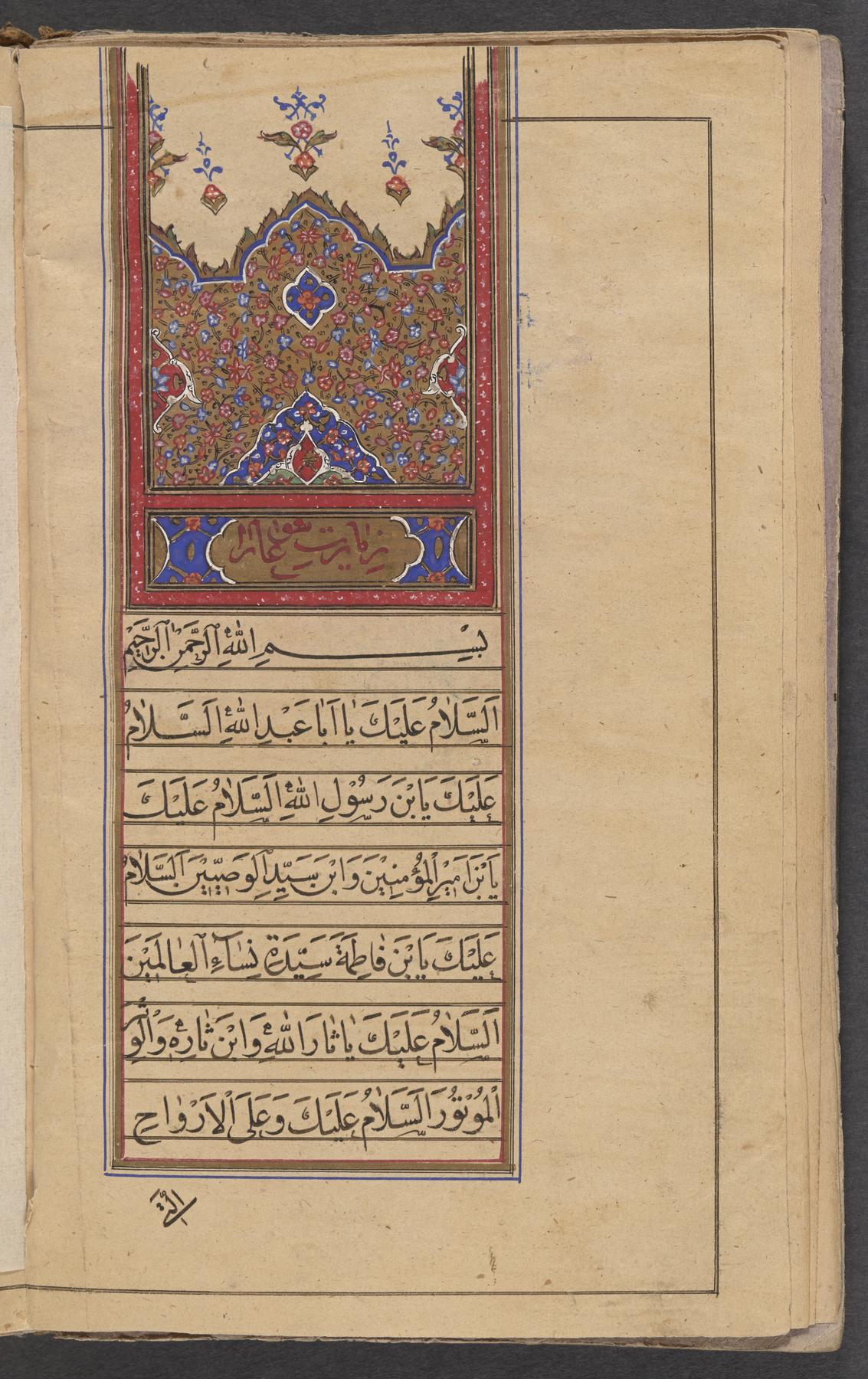 Inlay: Another binding decoration technique where the leather of the cover is cut away and an insert in the same shape is placed into the space. The filigree design, above, is an inlay design. If you were to run your fingers over the cover pictured above, you would find that the design is flush with the leather, not raised, because it is not stuck on the leather, but set into it. A detail from the same cover is provided below. You can clearly see where the red leather has been cut away so that the lobed medallion can be placed into the open area. 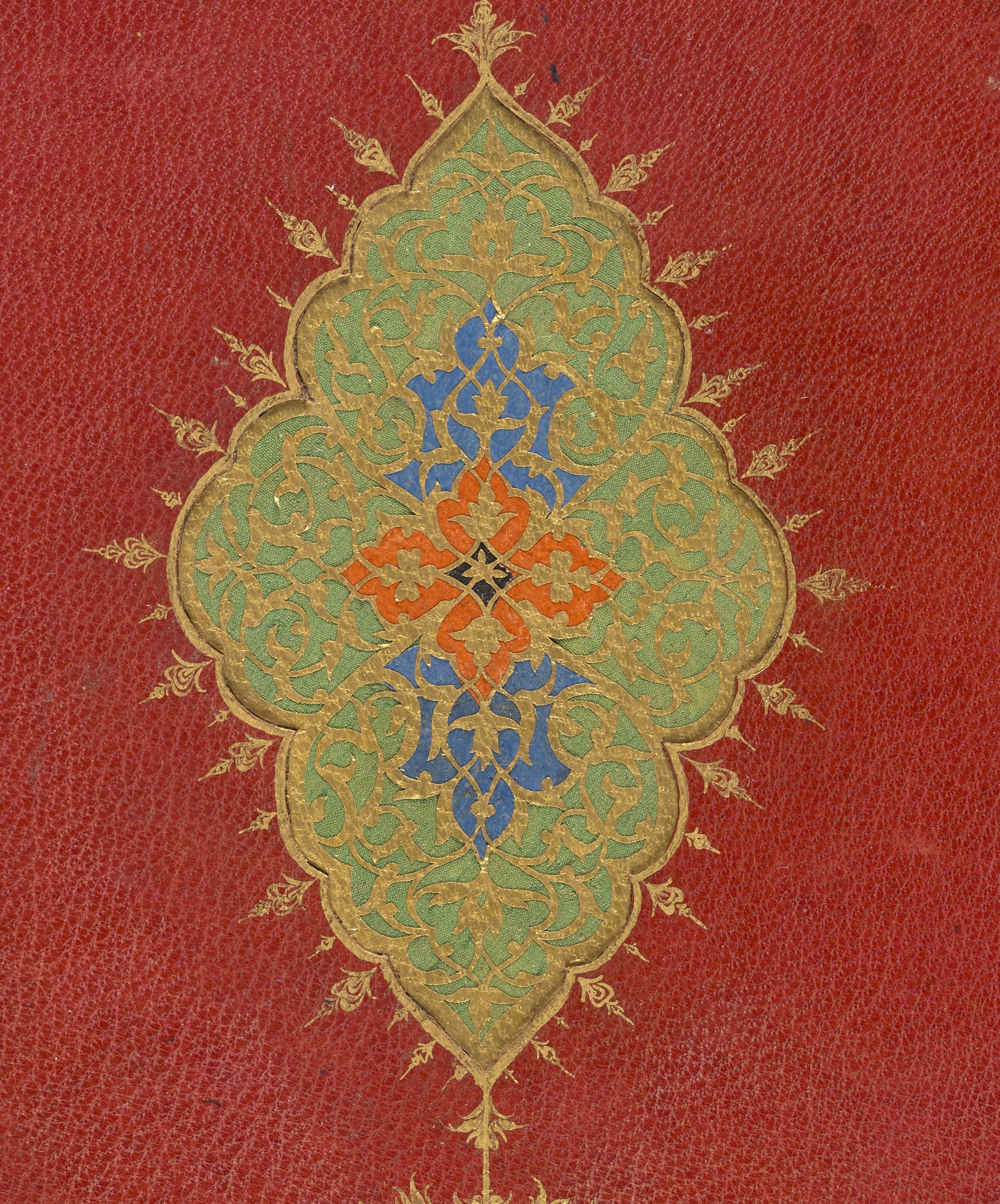 Onlay: Another binding decoration technique in which paper (and very seldom, leather) is cut out and laid over the leather of the outer covers. The onlay is then usually blind or gilt-stamped. Onlays can peel off if the storage conditions of the book are not ideal. Even if they do peel off, a shadow or impression from where they were usually remains. The image below is a detail of the central medallion from Columbia University RBML MS Or 50. 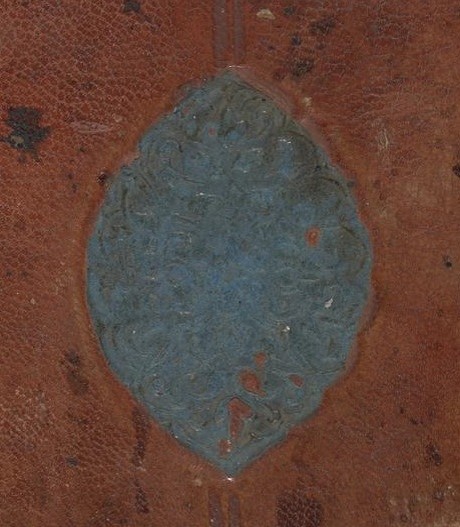 Text Dividers: These are illuminated decorations (usually) that show some sort of internal division in a text. I am including marginal medallions under this larger heading. Text dividers may be most familiar to you from copies of the Qur’an. The Qur’an usually has some or all of the following types of dividers: (1) verse-ending markers (gold roundels, or small flowers) at the end of each verse, (2) juz’ and hizb markers, which are marginal medallions that indicate where portions of the text begin, (3) five and ten verse markers, (4) surah heading markers. The image below shows a compilation of these types of markers. The style will differ from one copy of the Qur’an to another, but the function is the same. On the far left of the image are two examples of surah headings. The rest of the images are marginal medallions signifying hizb, 5 and 10 verse markers, rukūʿ (bowing) and sadjah (prostration) markers. Text division markers are not limited to the Qur’an. They are used in poetry, devotional books, collected works, histories, anything where the reader will benefit from knowing visually where a new section begins. See the many Devotional books and copies of Dala’il al-Khayrat on OPenn for more examples of text dividers. 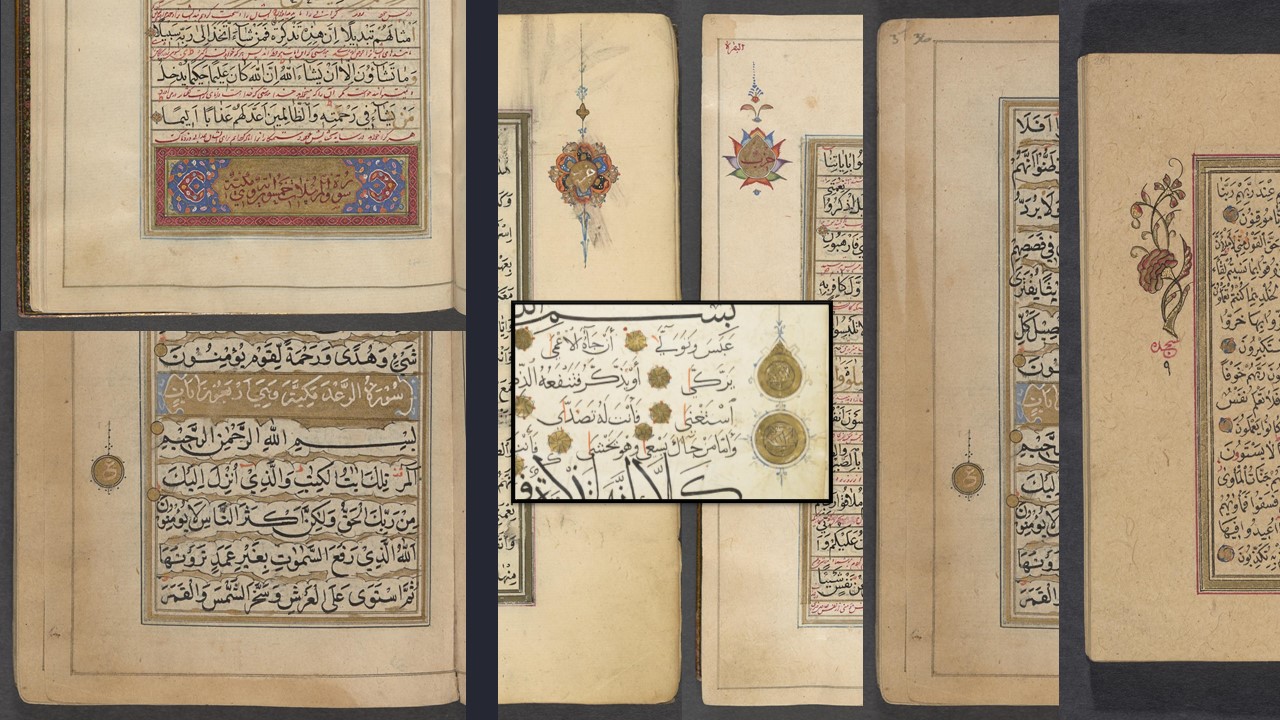 Tooling: Tooled leather covers are covers that have been blind-tooled (tooled without color) or gilded (tooled using gold) to create a design. This image is the outside of a Mamluk style cover, Penn Libraries Katz Center CAJS Rar Ms 123. Different tools, including various kinds of stamps, were used to create the patterns of lines, dots and geometric shapes. 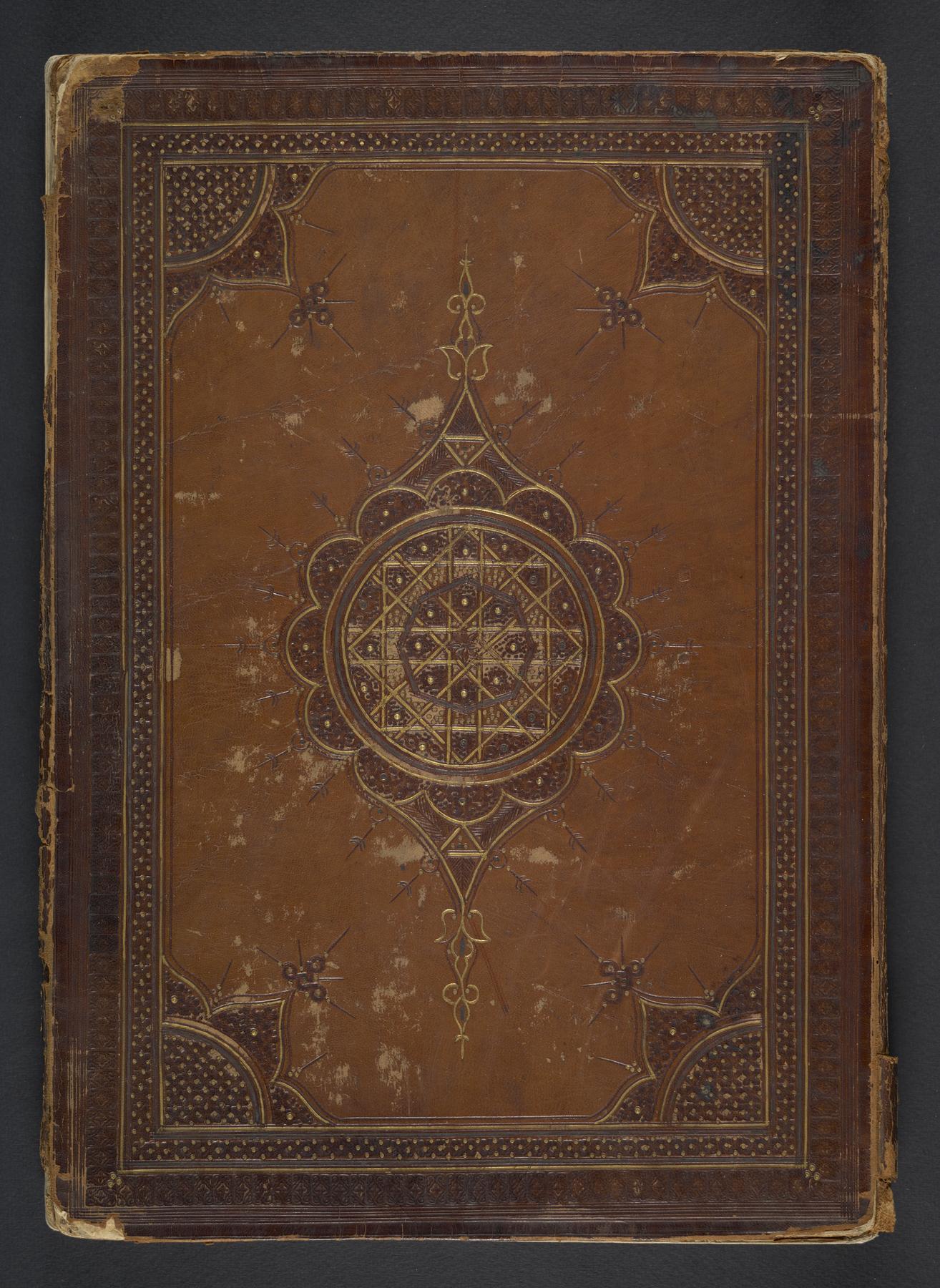 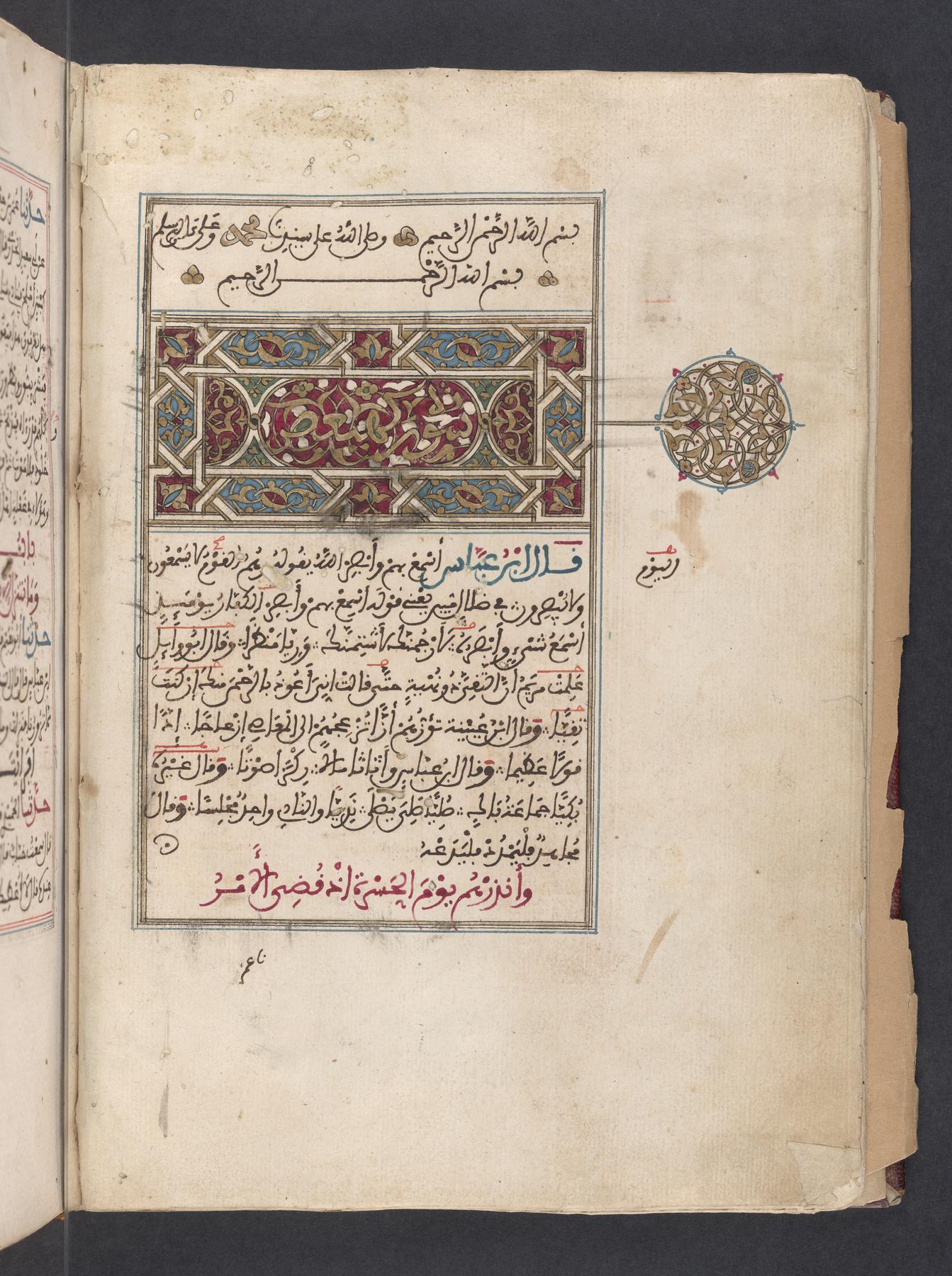 Watermarks: When paper is made with a mold and deckle (a kind of removeable frame for the mold), the mold can have a wire design woven into it which then shows up as a thinner area in the finished sheet (less pulp settled there when the sheet was drawn). When you shine light through from the back of the paper, you can see the design. Papermakers used these designs to mark their paper. Such designs are sometimes useful for finding a date after which a work was copied. European papers that were exported to the Islamic world (14th century on) mostly include watermark designs or initials. Papers made within the Islamic world did not usually incorporate watermark, except after the 19th century when machine-made paper began to be produced. Below are two watermarks found in manuscripts from the UPenn Libraries (Right: Ms. Oversize 22 Item 2 [not yet on OPenn]; Left: LJS 189. 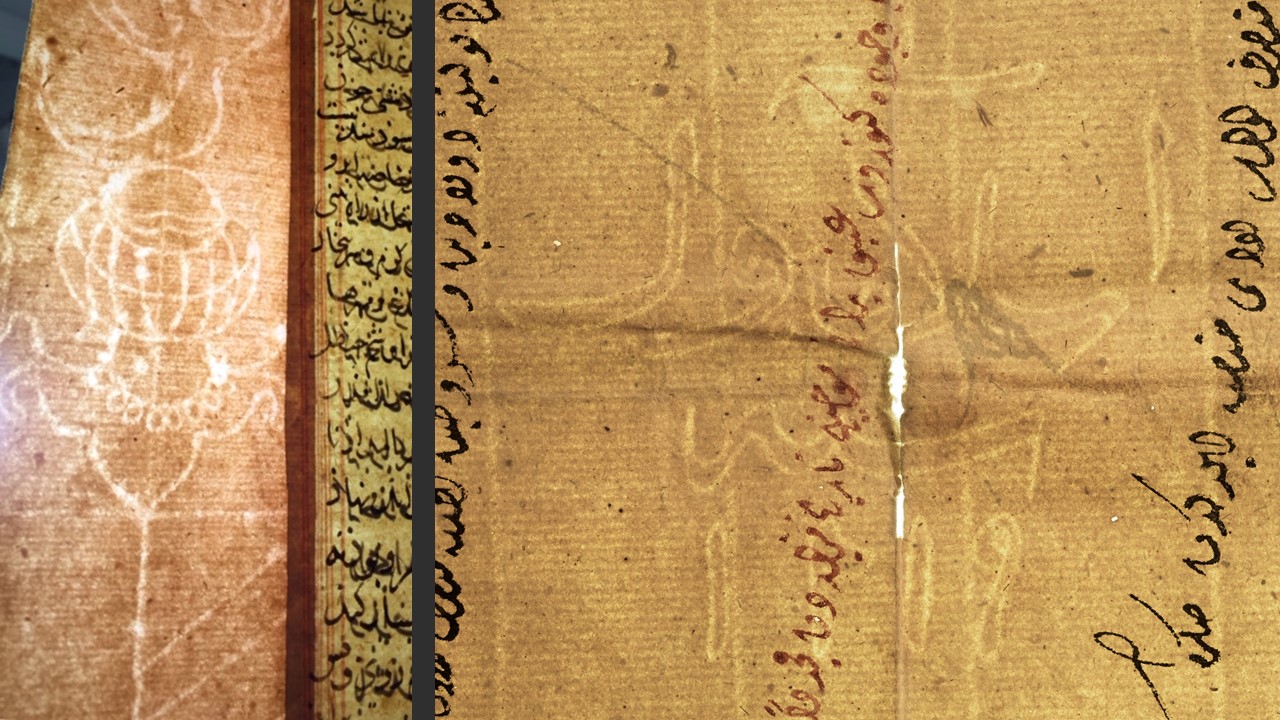 This concludes the photo guide. You can check out the References and other SIMS Resources here, or go back to the Content Pages.