A codex is a manuscript book, as distinct from manuscript leaves and rolls of any kind. There are three types of binding for Islamic manuscript codices, not including loose leaf codices, which are not bound. In the drawing below, from Adam Gacek’s Arabic Manuscripts (2009), the type of binding depicted is known as Type II, which means that it has a flap attached to the lower cover that folds up over the fore-edge when the book is closed. Usually, the flap is then tucked under the upper cover. This is the most common type of binding found on Islamic manuscripts. Type III covers are the same, but without the flap. Type III look like what you may be used to seeing on modern books, except that the covers are cut to the same size as a textblock (meaning the bunch of leaves which hold the writing) with no overhang. The illustration below also shows what is known as a case binding, which is a cover that is assembled and then attached to the textblock as one piece. The doublure hinges are what connect it to the textblock. Type I, quite uncommon, is a box binding where the text is actually kept in a box. 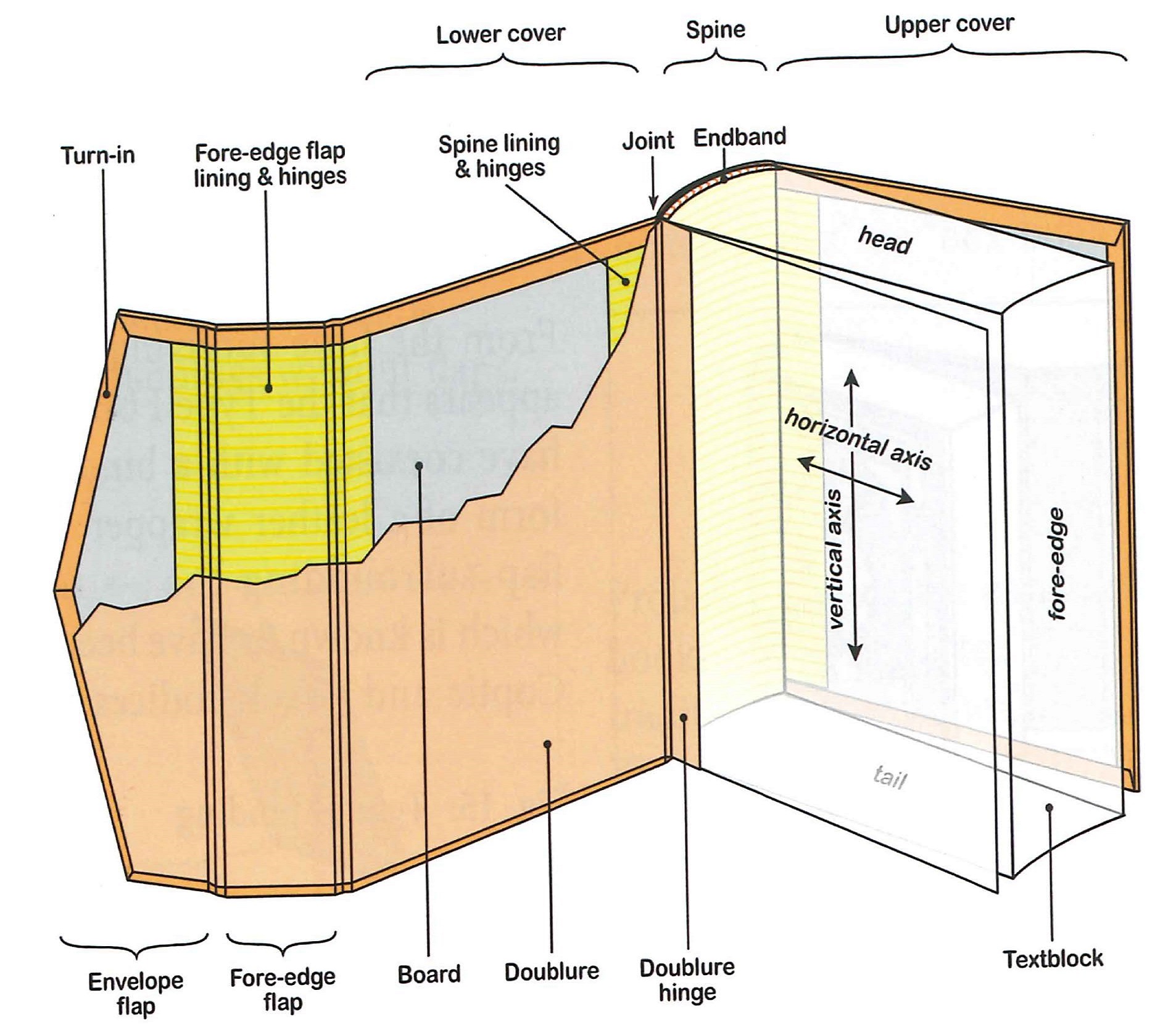 In terms of materials, bindings are often leather over pasteboard, which is made up of a stack of old manuscript leaves, or scrap paper, often with writing on them. This stack of old paper is then covered over in leather. The board sometimes starts to come apart, which means that you can then see the papers making it up, as in this photo of Lewis O 19. 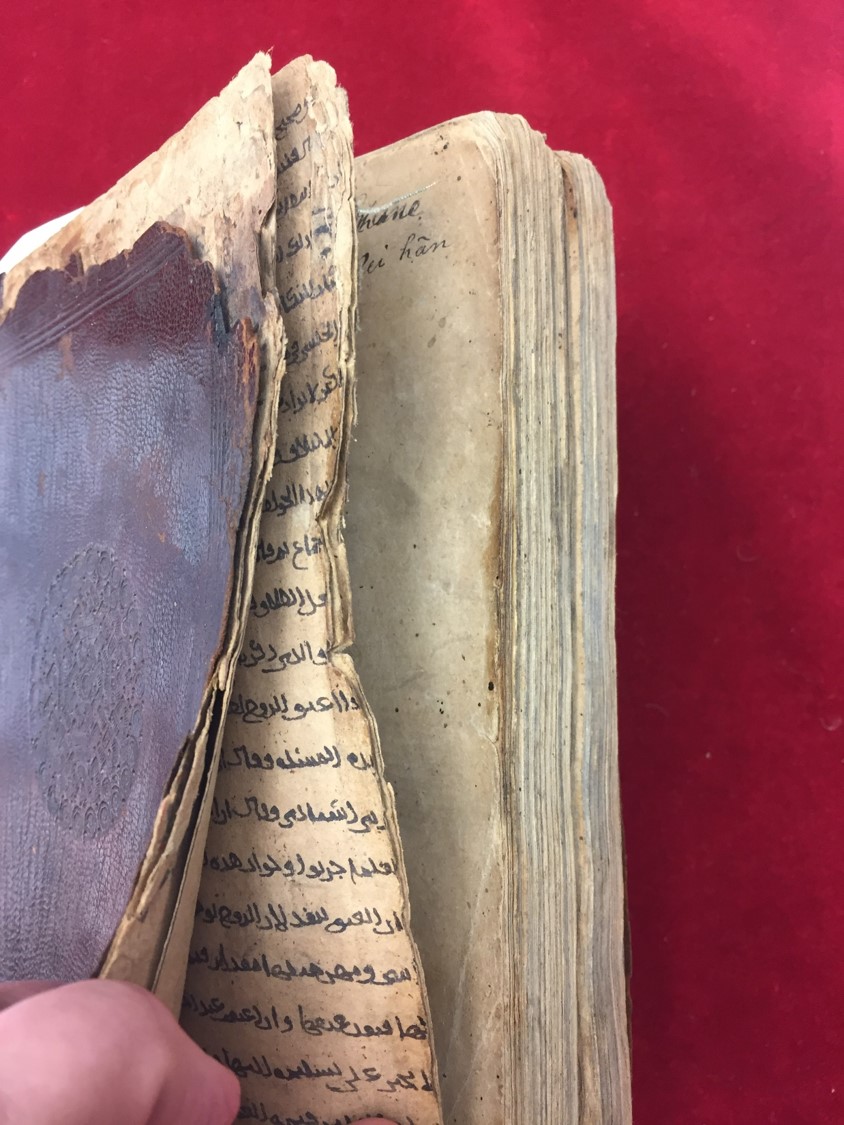 The most common type of decoration for book bindings is the stamped central mandorla (almond-shaped design) with pendants, usually on the vertical axis, as seen in the image below. This particular style is found for centuries, across the Islamic world. Sometimes, there will be a gold-tooled or blind-tooled frame around the outside edges of the upper and lower covers in addition to the mandorla and pendants. Tooling is when designs are pressed into the leather using heated tools or individual stamps. The designs can be simply pressed leather, blind-tooled, or they can be pressed with gold, which is called gold-tooled. For more examples of binding decoration terms and images, see the Glossary. Another type of binding that you may see, particularly on manuscripts produced in Persia (now Iran and surrounding areas) and India, is lacquered. In these bindings, the boards are covered with a layer of gesso, which is a white mixture of a binder and chalk, on which a picture is painted. Then, layers of varnish are applied to the boards. The varnish is yellow, which affects the way the painting looks at the end. It is common for these bindings to have a large painting of flowers and sometimes birds on the outside cover and a single, large flower on the inside cover, as shown below. They appeared first in the 15th century but were especially popular in the 18th and 19th centuries. 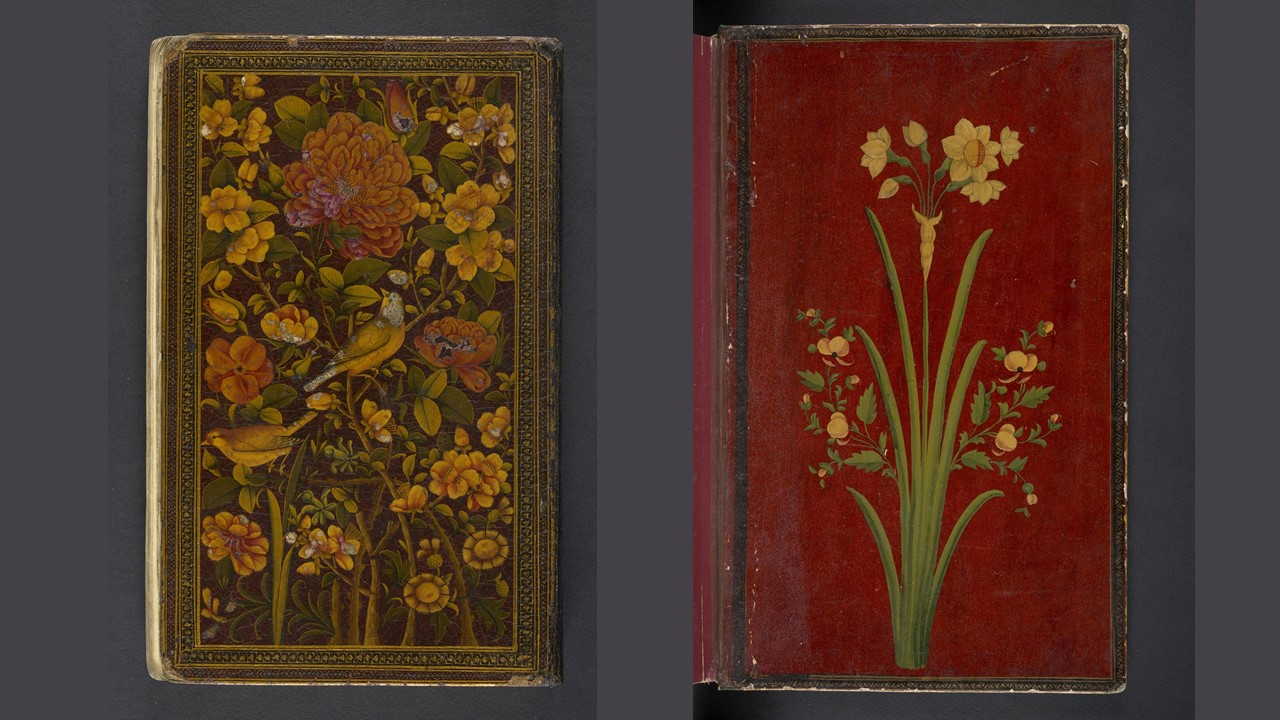 That concludes the introduction to binding. You can do the Bindings exercise now, or jump to any other page you like.