There are several scripts that commonly appear in Islamic manuscripts, but the following three are the main types that you will probably run across when looking at manuscripts. When a script name is linked, click on the name to see an example page of the script from OPenn’s collection.

Naskh is the most common book hand. It is clear, readable and is not specific to any region, though it does tend to be used more heavily in the central region, meaning Egypt, Syria and surrounding areas. It is also sometimes used when copying books in Arabic in areas such as Iran, India, Anatolia, etc. where Arabic is not the spoken language.

Nastaʻliq is the book hand of the Indo-Persian region. It is used for the vast majority of Persian language manuscripts. In comparison to naskh, nastaʻliq slants more to the right and has more ligatures.

(Image: detail from Columbia University RBML MS Or 25 on OPenn)

Maghribi is the book hand of North Africa (excluding Egypt) and southern Spain. Scripts used in manuscripts produced in West Africa also have more similarities with maghribi than they do with scripts produced elsewhere. Maghribi script has a few particular letter shapes and is generally more curvilinear than naskh. The strokes in maghribi also tend to be of a more uniform thickness than in other scripts because of the way the reed pen is cut.

(Image: detail from Columbia University RBML MS Or 238 on OPenn)

There are six scripts which are known as the ‘Six Pens’. They are what is known as proportioned script because the letter sizes are in proportion one to another. The scripts can be scaled up and down easily and are quite readable. The six below can be broken up into three sets of two. The top pair and second pair are basically each a small and large version of the same script: naskh (small) and thuluth (large), rayhan (small) and muhaqqaq (large). The bottom pair (riqaʻ [small] and tawqiʻ [large]) are scripts mostly used for correspondence and not for book copying. For the most part, you will not see them in codices. A diagram of the six pens is below. From the top, they are: naskh, thuluth, muhaqqaq, rayhan, tawqiʻ, riqaʻ. 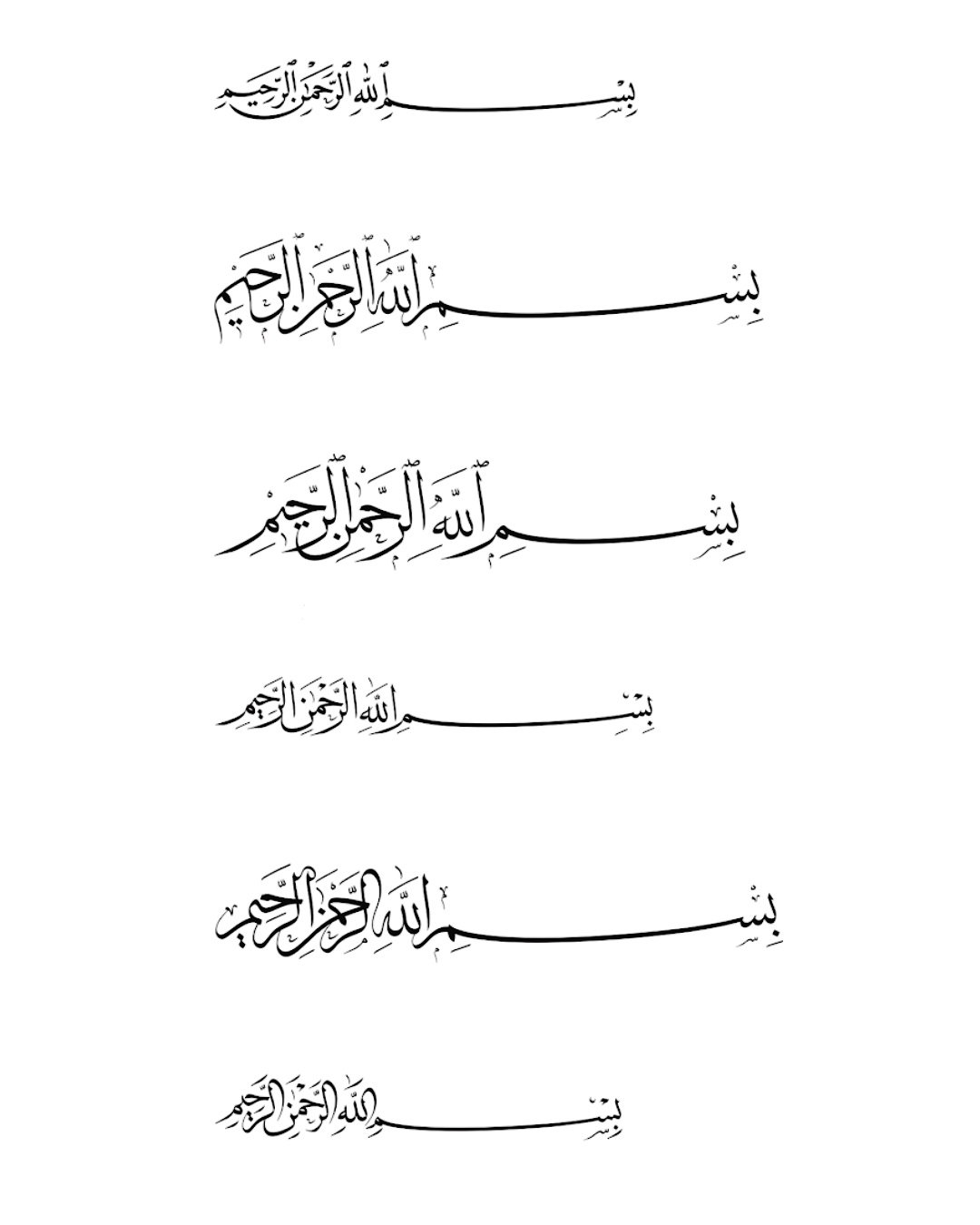 Scripts can be combined together to create beauty, but also to help orient the reader within the text. The image below, from a copy of the Qur’an, illustrates how the combination of scripts works. There is the text of the Qu’ran (in naskh), the translation in Persian (in nastaʻliq), the surah heading (in thuluth) and the one line in gold (in muhaqqaq). Three other scripts of which you should also be aware are Early Abbasid, also known as Kufic, which was used in early copies of the Qur’an (9th/10th century) and ruqʻah and diwani which are later Ottoman Turkish scripts. Examples of these can be found in OPenn. Click on the name of the script for examples of each.

That concludes the introduction to Scripts. You can do the Scripts exercise now, or jump to any other page you like.