Decoration includes illumination, illustration, diagrams and anything else that is not text or notes. We can think of illumination as a manuscript’s functional beautifiers. Illustration, on the other hand, is pictorial and consists of paintings that usually represent a scene in a manuscript’s narrative text. Diagrams are one category of illustration and are mostly found in scientific texts.

Illumination has several possible functions. It can show where texts begin and end. It can show internal text divisions. It can help direct the reader’s attention. It can serve as filler for spaces on the page. Illumination always involves multiple colorful pigments. Below is a double-page opening that shows various types of illumination: a superimposed headpiece (also called a titlepiece) with geometric designs, gold cloudbands with bright buds and blossoms surrounding the lines of text, rubrics or panels; white floral sprays on a blue ground between the text colors and multi-colored rulings that outline the written surface. The margins around the page opening are also decorated with a landscape of plants and animals in gold. 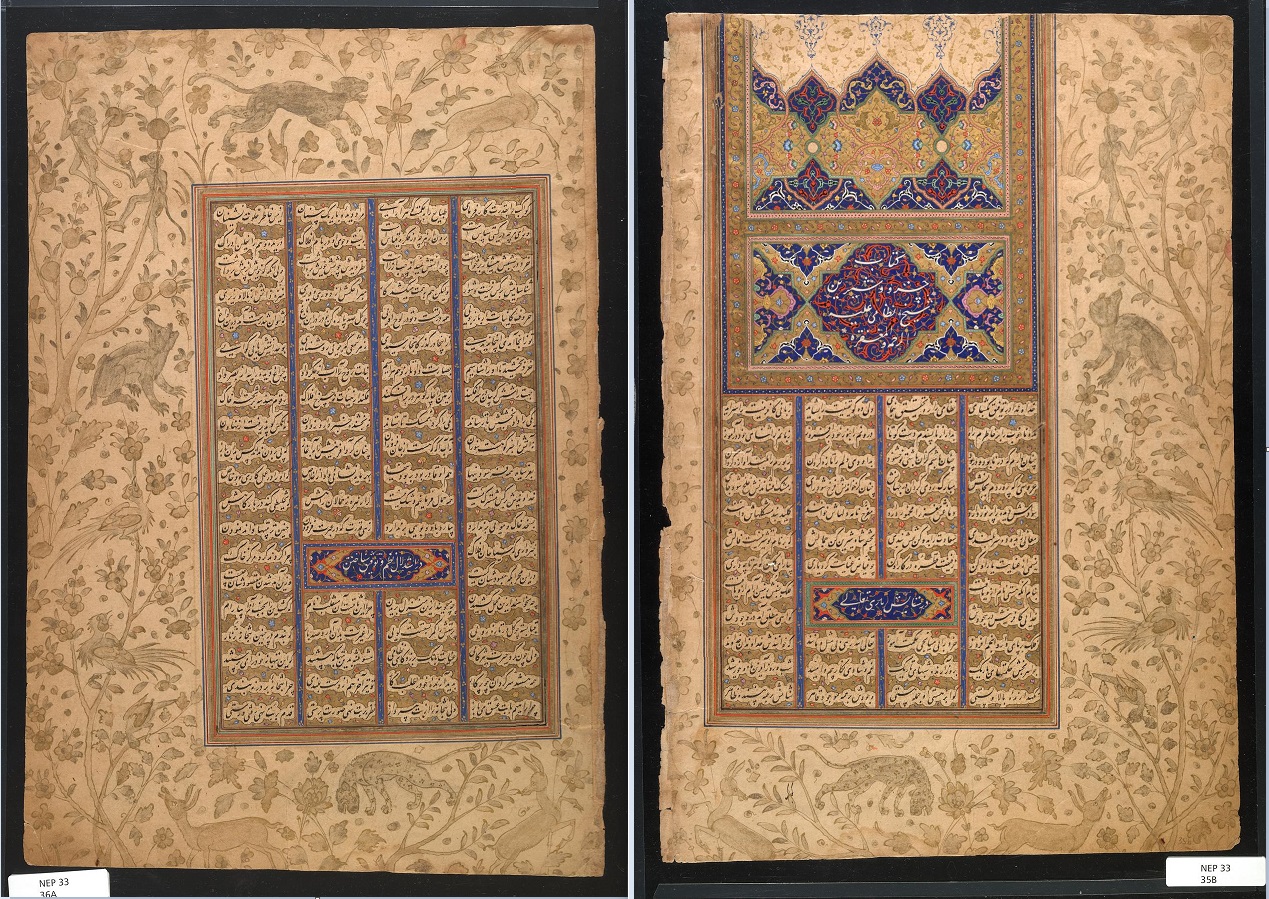 The above page is quite elaborately illuminated, but illumination can also be much simpler. Often, you will find just a headpiece, or a suggestion of a headpiece and nothing else decorative in the manuscript. An example of a very simple (and incomplete) headpiece is below. 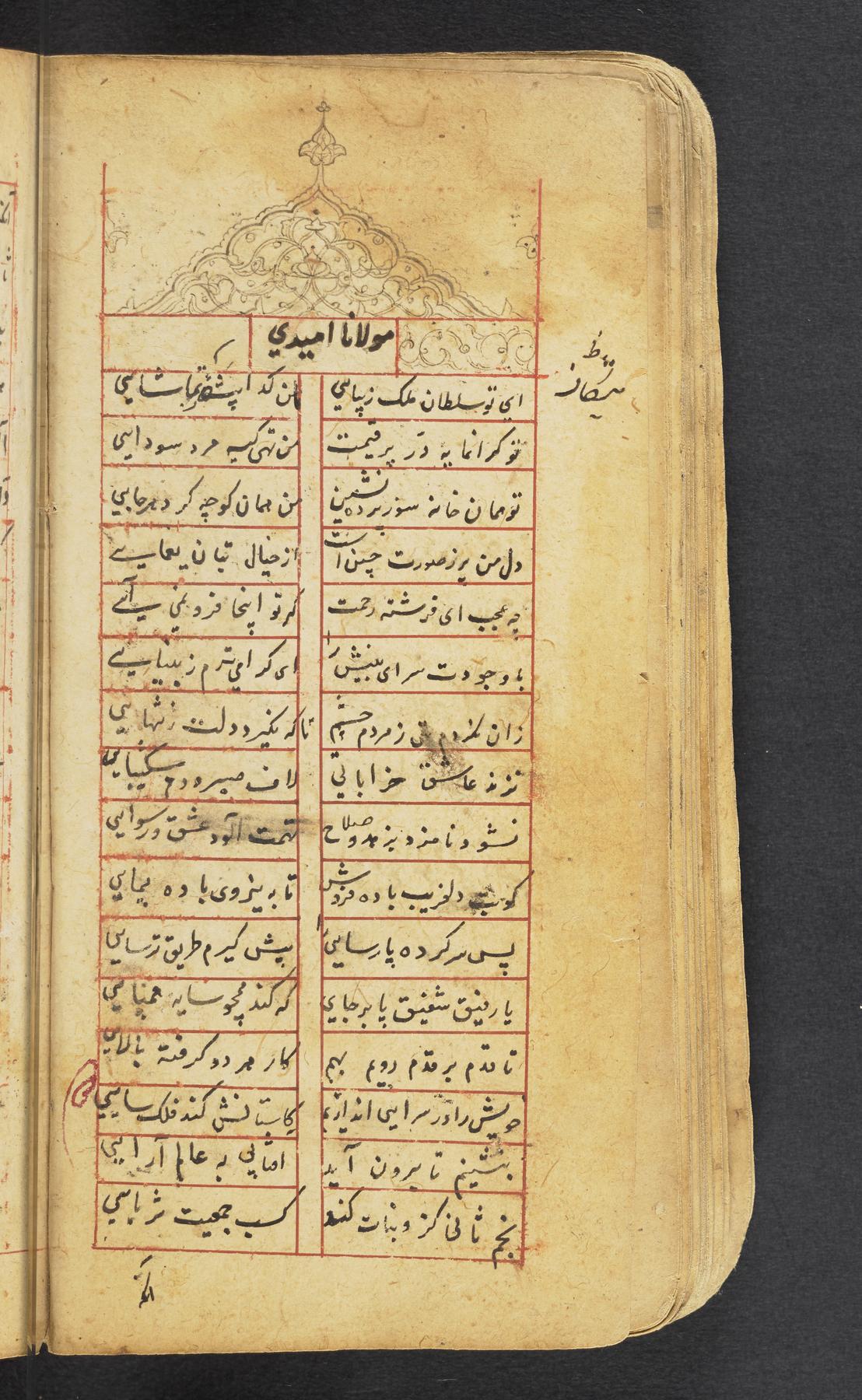 It is worth noting that the vocabulary for describing illumination in Islamic manuscripts is not standardized. Specialists tend to use either English words borrowed from describing Western manuscripts, or they use Persian or Turkish words. As an example of scholarly description of illumination, here is a description written by Dr. Carine Juvin of an illuminated title page from a juz’ (1 part of 30) from a Mamluk Qur’an now located in the Louvre. The Penn Museum has another juz’ (part) from this same set, with the same decoration, so we can look at that image, while reading her description. See if you can connect what you see in the image to her description.

“The frontispiece or title page (folio 1a) contains a rectangular panel with three registers delimited by a knotted chain pattern in gold paint. The square central register contains an empty multifoil medallion outlined by two continuous intersecting strips. The spandrels have floral motifs: stems and leaves in gold paint, blue lotus buds with either one lobe or three, pink lotus buds with four lobes, and blue rosettes with three gold petals, all on a black background. The interstices formed by the two strips have a lapis blue background on which a plant motif appears, composed of a green fleuron with three lobes between two gold half- palmettes. The two oblong bands above and below the central register contain the title…The entire panel is outlined by blue framing lines with a lancet projecting from each corner. On the left side it is extended out from the border by three illuminated vignettes.” (pp. 109-110 from: “A Mamluk Qurʾānic Ǧuzʾ and Its Connection with Amīr ʿAbd al-Qādir al-Ǧazāʾirī,” in Journal of Islamic Manuscripts 10.1 (2019): 105-135.) 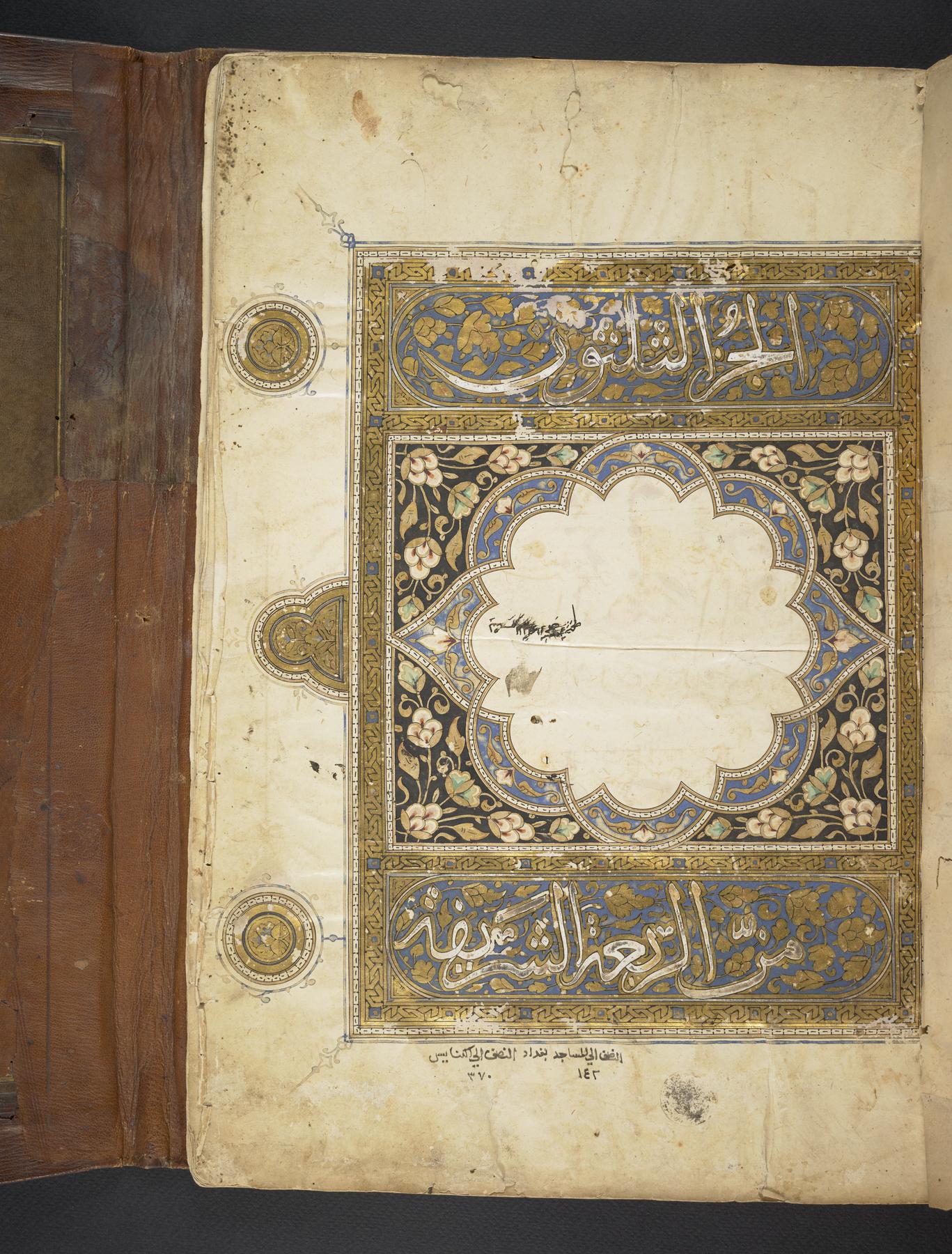 For another approach to describing illuminations, see this blog post from the British Library about illuminations in Islamic manuscripts. In it, the author very kindly lists both the English and Persian/Turkish vocabulary for describing items.

Illustrations generally show a scene narrated in the text. You can see in both of the paintings below how the image expand the margins to make more use of the page. You may also notice the architectural detail in the right-hand image. Although perspective is not generally used in these paintings, you can tell how far objects are supposed to be from you, the viewer, based on where they fall on the page. Lower on the page is closer to you, higher on the page is farther away.

You may also notice a few lines of text in both images. That text goes with the image, so the spacing of the lines on the preceding page or pages need to be arranged so that the line of text that goes with the image ends up in the correct place on this page. (See Layout page for more information). 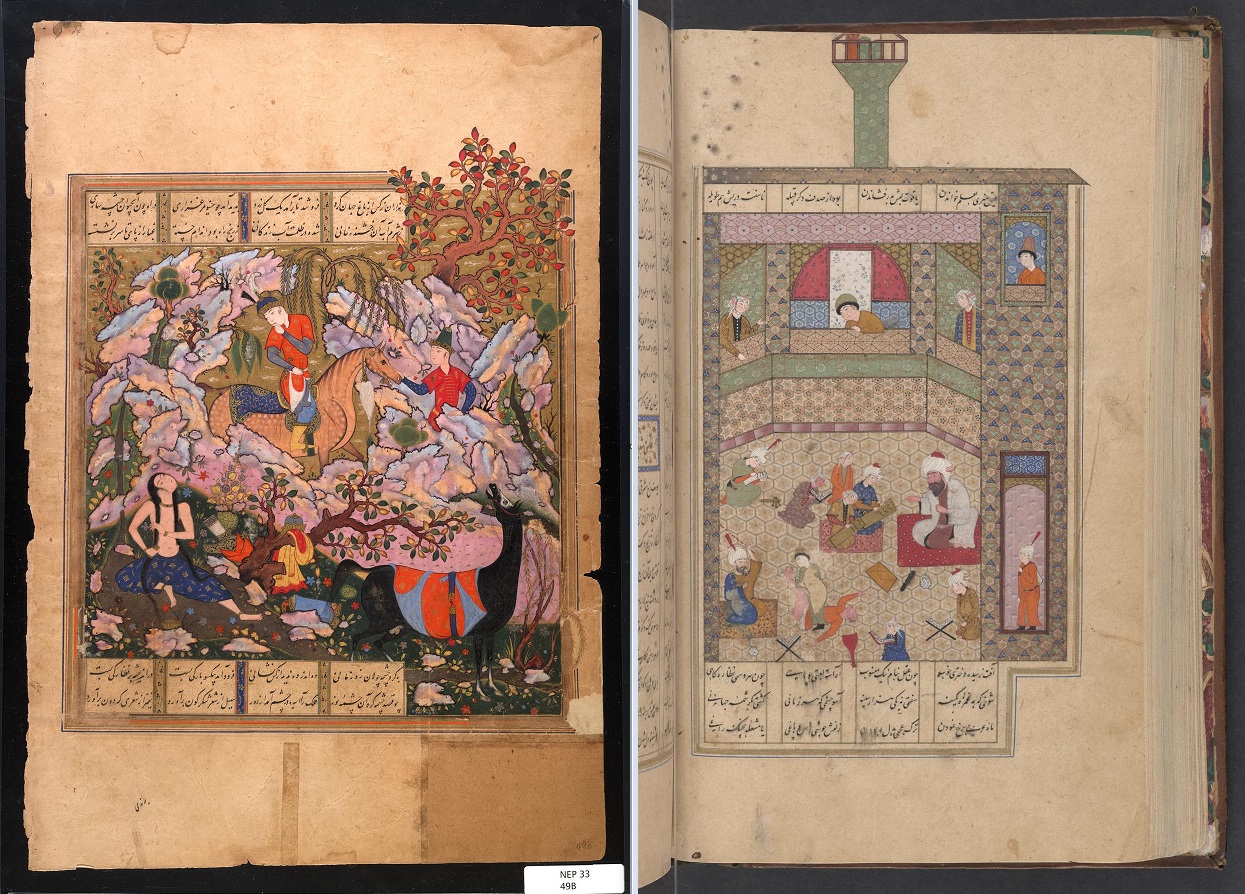 Illustrations can also be rather schematic, as is this illustration from the popular prayer book Dala’il al-Khayrat. In the illustration below, the Prophet Muhammad’s mosque is represented by the lamp and the stairs (minbar). 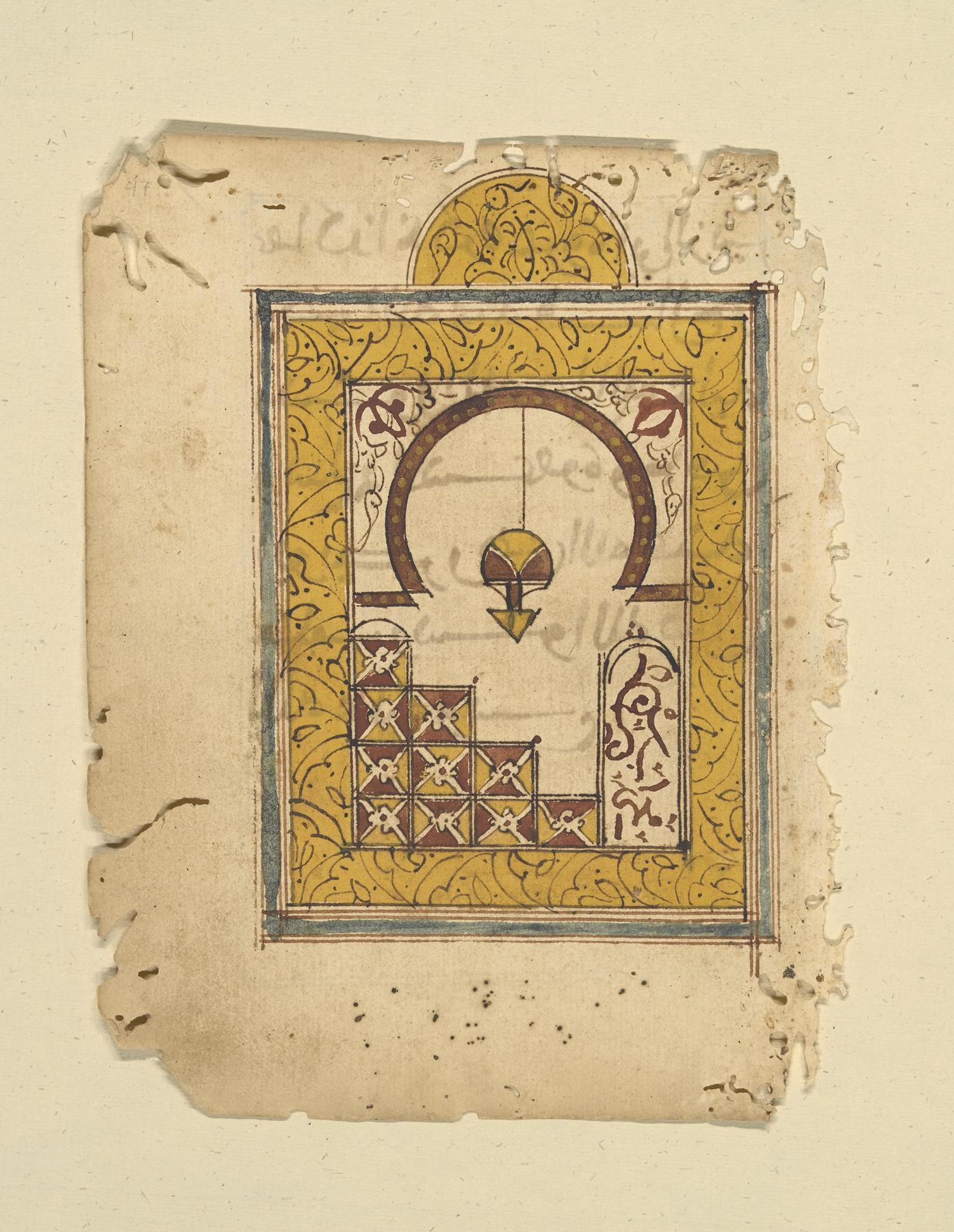 Finally, we have diagrams which range greatly in detail and skill. Diagrams are found primarily in scientific texts including astronomical, astrological, medical, mathematical and others. Below are pages with diagrams, one from a geometry text (left) and one from an astronomy text (right). 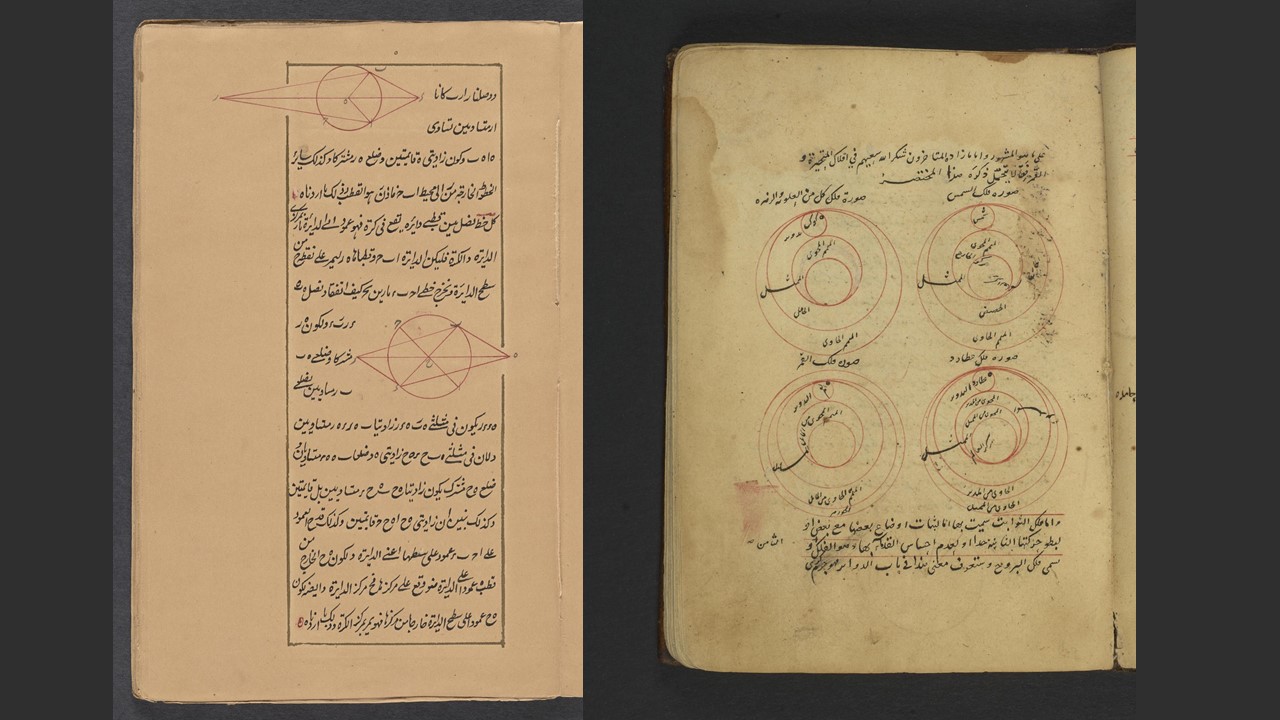 Sometimes, albums are made up of illustrations that may or may not have connections one to the next. If you go to OPenn, you can see examples of these latter types of collections. There are two examples linked below for you to explore.

In traditional Islamic manuscript production, the text is copied first by a scribe and spaces are left for another artist or artists to add the illumination, illustrations or diagrams. Sometime the blank spaces are never filled in, and there are many Islamic manuscripts that lack what was originally planned as a full program of decoration. A fine example of that is the Shahnamah at Bryn Mawr College Libraries BV65. You can scroll through that manuscript on OPenn and see that there are some complete illustrations, some partially finished illustrations, and some blanks where illustrations would have gone.

Decoration is a large topic. This page only begins to brush the surface. See the References for other places to search for resources. That concludes the introduction to decoration. Do the Decoration exercise now, or jump to any other page you like.