Manuscript notes are anything written in the manuscript that is not intrinsic to the text being copied or decorations that go with it. Manuscript notes can be divided into three basic categories:

Legal notes help document what has happened to a manuscript as a physical or material object after it was produced. Such notes record what is often called a manuscript’s provenance or history, including how many hands a manuscript has passed through and at what times and in what places. They would include owner’s notes, buyer’s notes, seller’s notes, borrower’s names, library stamps, waqf (endowment) notes, etc. In the image below, you can see a number of owner’s notes and a stamp. It is fairly common to find such notes and stamps on the flyleaves (the blank pages at the front and back) of books. 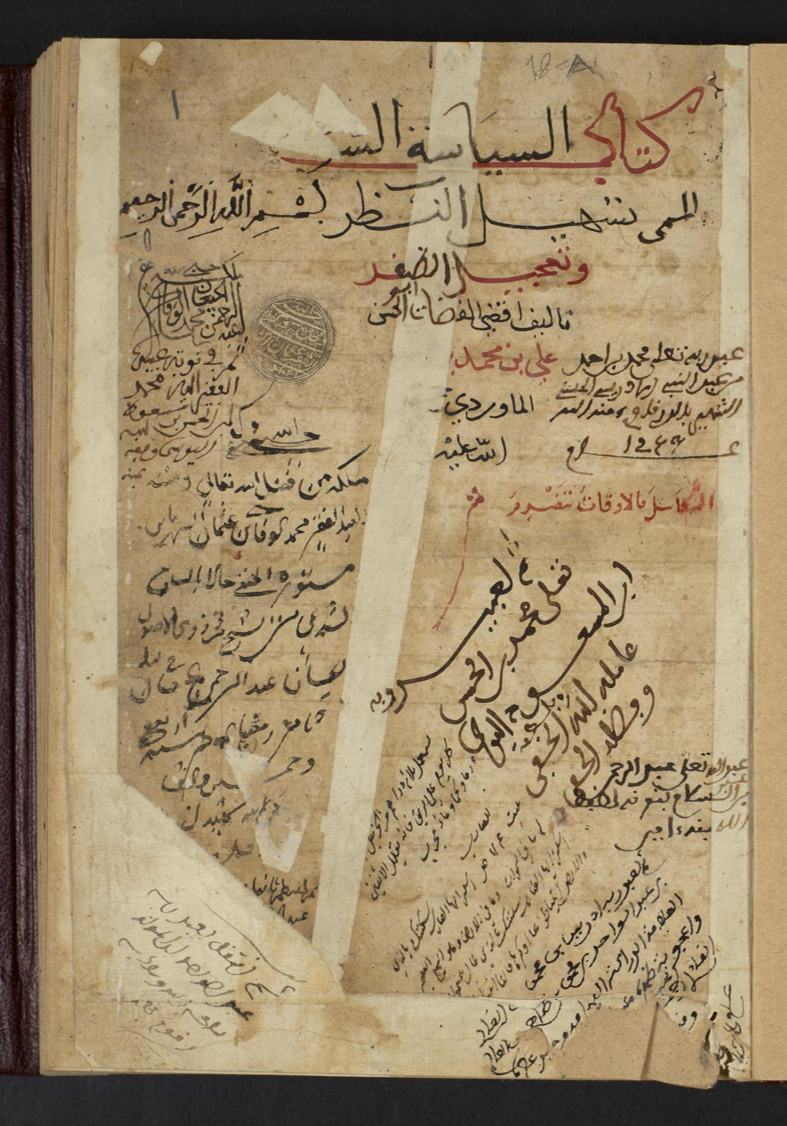 Another type of legal note that can be found in manuscripts are waqf notes, which are endowment or pious donation notes. These types of notes usually give the title of the item being donated, who is giving it, to whom, when and for how long. Two examples of waqf notes are below. The note on the right is in an illuminated panel and the note on the left is in the margin around the panel. If you need larger images to be able to read the notes, you can find them on OPenn (links are below the images). 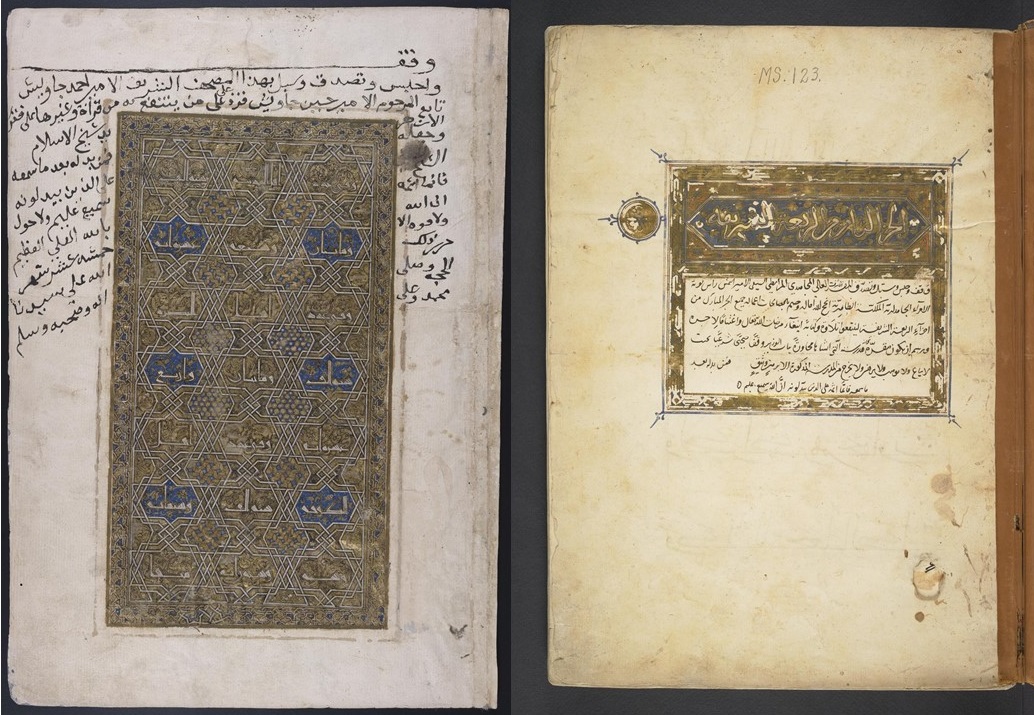 Textual notes are any notes that have to do with the text of the manuscript. They include reader’s notes, collation notes, text emendations, marginal commentary, etc. The example below contains a reader’s note in red saying when he read the copy. The triangular shape of the reader’s note may mislead you to think it is the colophon. The colophon at the end of a work often contains the name of the copyist along with the date the copy was made and sometimes a location. It is often written in a triangle shape. In this manuscript, the colophon is not the triangle shape, but is instead over on the lower left of the page in black. You may also notice in the image below that this page contains a page number in the upper left corner. This is rare, and was probably added by a later owner or reader. 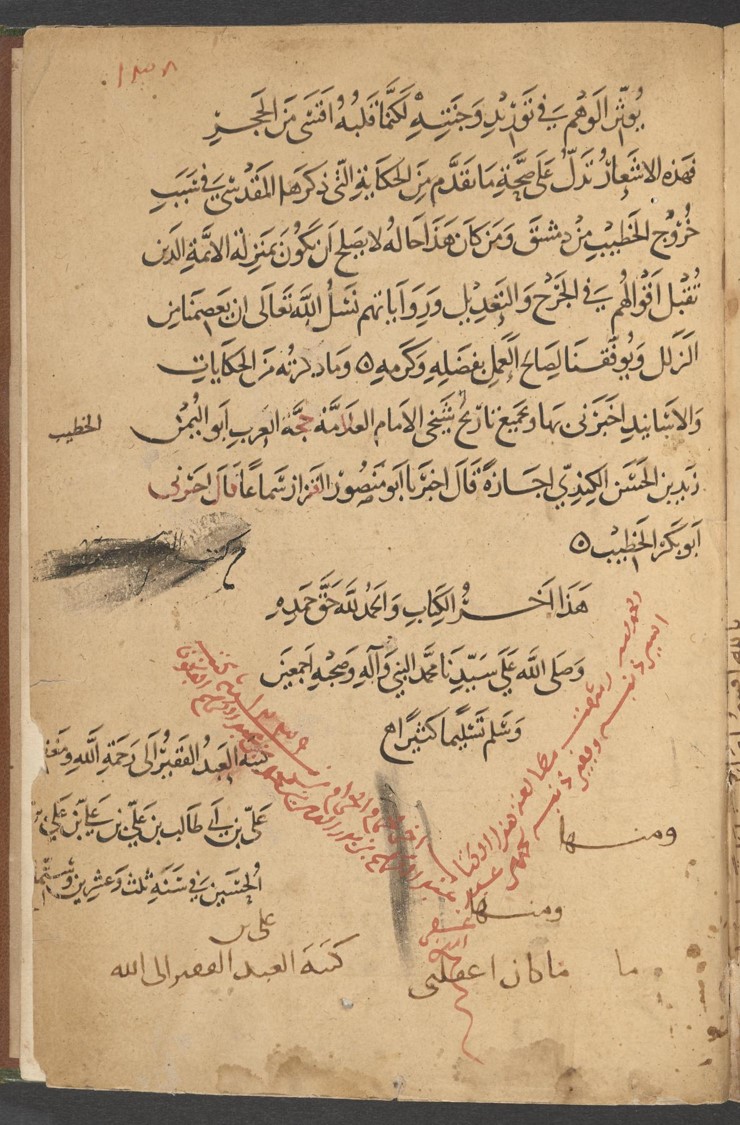 Unrelated notes are notes and drawings that seemingly have nothing to do with the manuscript at all. These include lists of births and deaths, recordings of major events, doodles, shopping lists, prices for things other than the book in hand, etc. Below are some birth notes found in the back of a devotional book. These notes do not have anything to do with the text or with the book as an object, exactly, though they can sometimes tell us things about where the codex was located or who had it. In that sense, they may be thought to fall under the ‘legal notes’ category. For that reason, the ‘unrelated’ category is sometimes not really considered a category, and we end up with simply legal notes and textual notes. 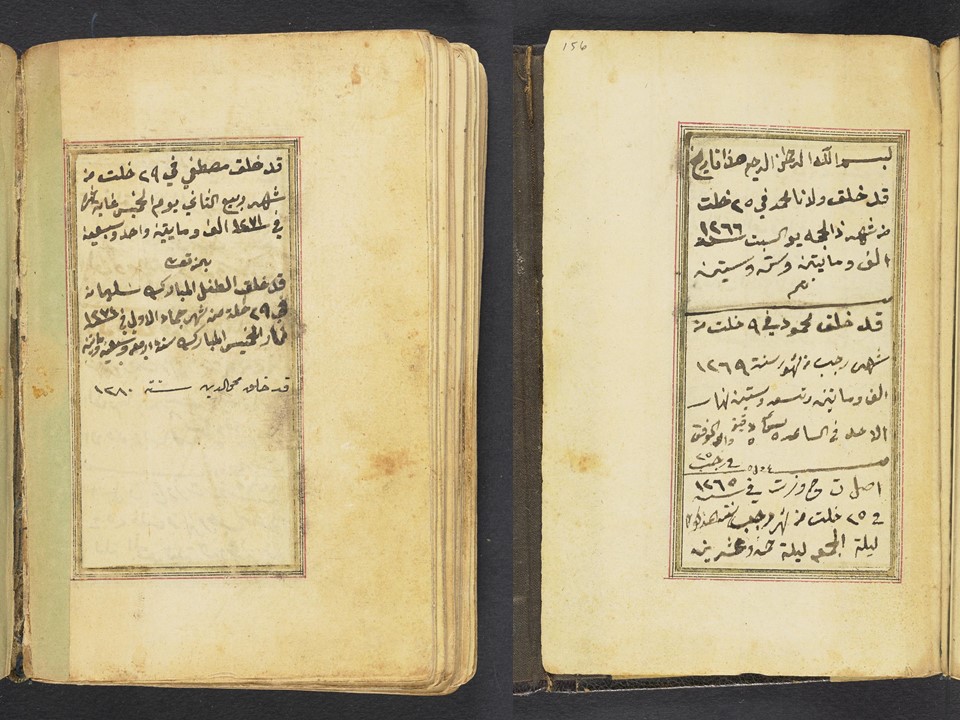 Stamps, or seals, are ink or embossed stamps of an owner, library, or reader that have been impressed on the pages of the book. They can be quite tricky to read since the order of their words is not always evident. Sometimes they have a date on them, but often they are just a name. Stamps will frequently be in more than one place in the book so that if one is not clear, another may be more crisp and easier to read. You can see this in the image below where the stamp at the back (on the right) is not very well-stamped, but the one at the front (on the left and then enlarged in the middle) is much clearer. Sometimes, a stamp does not give a name at all, but instead offers blessings. 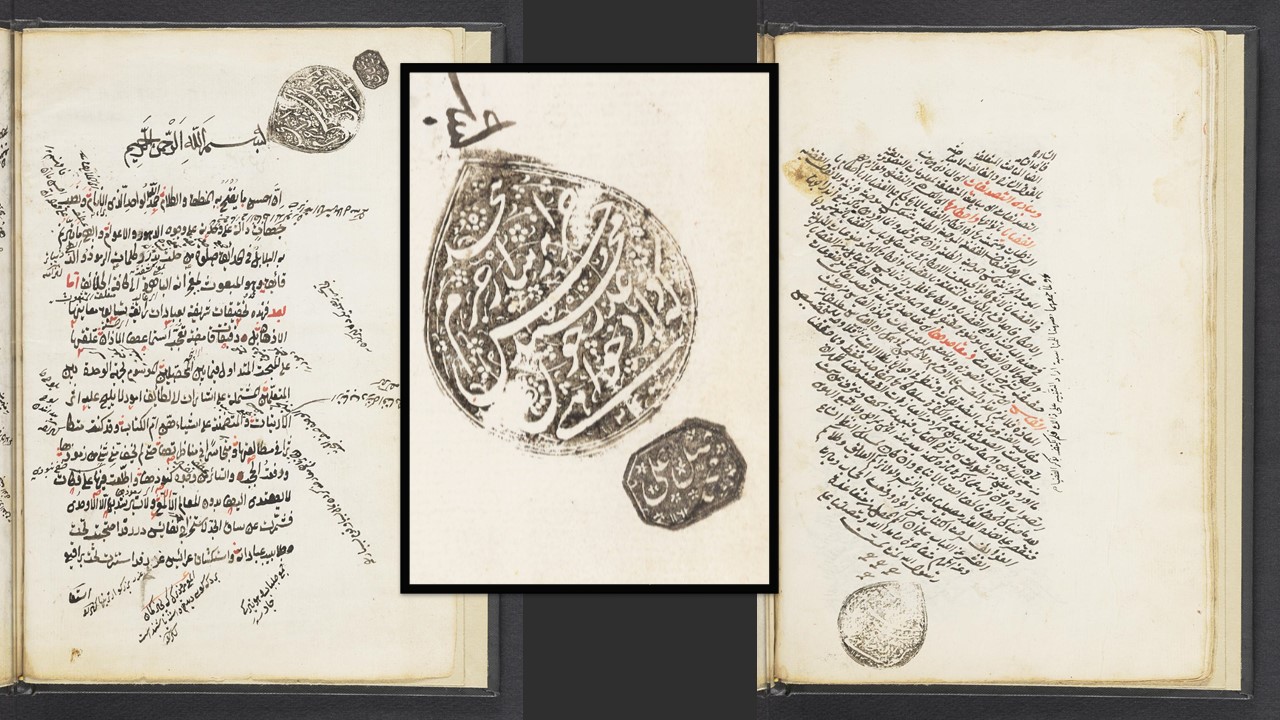 That concludes the Notes section. There is no activity to go with this section, so please continue to any other page now. Or, if you are finished, go to the Exercises page and do the cumulative exercise.

You can also go check out the References, other SIMS Resources, look at the Glossary for more photos, or go back to the Content Pages.